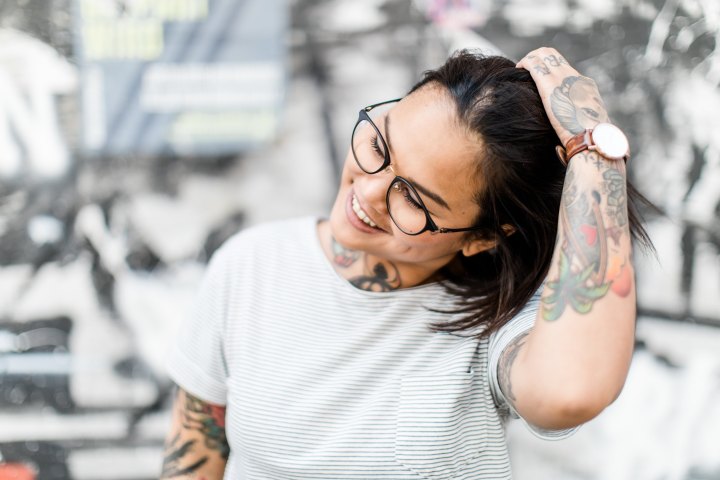 A note on labels: Like many people with mental health struggles, I’ve experienced my fair share of misdiagnoses. While “bipolar” and “borderline” are no longer applicable or helpful labels for me, I hope that the resources I created in the past can still be helpful. (Jan 2019)

Not too long ago, I wrote an article about the misconceptions around borderline personality disorder.

“I reject the idea that people with BPD aren’t deserving of competent care and compassion that would allow them to thrive,” I wrote, “and if we dismiss them as being irredeemable, that support becomes more difficult to access.”

Writing that piece was painful. Recalling the ways that people misconstrue my struggles was a deeply emotional process for me.

It also brought to light the very real stigma that still exists around BPD.

I started getting emails.

“My husband has borderline, but he’s horrible,” someone writes. “How can I get him to be more self-aware like you?” (This is almost, word-for-word, a message I received.)

“My partner with BPD is crazy, she’s too much,” someone explains. “What pills are you taking? Do you think that they’ll make her normal?”

This wasn’t the first time I was being held up as some kind of psychiatric achievement. Sometimes even my clinicians viewed me this way. “Most people with borderline aren’t like you,” a clinician told me recently. When I asked what that meant, he told me, “Most of them are just… flailing around, deeply unstable.”

Flailing around. That’s what most people think. Even our clinicians believe we’re chaos embodied, helpless, disturbed.

And thus I was propped up as an ideal. I was the repentant borderline, the good borderline. The more I was perceived as distancing myself from the disorder, the more people applauded me.

This is because the borderline that the world likes the most is the “reformed” borderline — the one that will apologize for being too much, will cut themselves down to be accepted, be neurotic in “acceptable” and small doses, and most of all, disavow any and all traces of the disorder.

In other words, the self-hating borderline is the one that the world loves the most.

It’s an uncomfortable truth, then, when I tell people that I don’t really hate my borderline mind. For all the hell it’s given me — and by extension, the folks who’ve supported me in my recovery — BPD has given me a beautiful intensity that I appreciate.

The world asks me to reject my borderline mind, looking for some symbolic gesture to demonstrate that I hate myself as much as they hate people like me.

In me, they see the redemption of their “crazy” spouse, their unhinged mother, their unruly child.

And so long as we view people with borderline in such a reductive way, we fail to appreciate what’s possible for people with BPD. We demand that they erase themselves or punish themselves, rather than coming into their own, realizing themselves fully, and perhaps even learning to love themselves.

It’s devastating to think that, as we characterize people with BPD as abusers that need to repent or as irredeemably lost, we create a culture that denies people with BPD the possibility of authentic healing and self-love.

In the process of my own healing, I’ve realized that BPD is not just a source of trauma, but in some ways, it’s been a source of unique strength.

The love that I’m capable of feeling for others, when it’s no longer fueled by fear, is a remarkable thing. My capacity for seeing the best in others, my ability to love deeply and fully, my sense of connectedness to the folks that I care about — these are things I would never change, so long as it comes from a healthy and secure place.

While I can be reactive, my sensitivity allows me to tune in deeply to the feelings of others. My firsthand experiences of pain allow me to make intense and empathic connections to others who might be suffering. And knowing what it’s like to be left behind, the loyalty that I possess makes me a reliable and caring friend.

What people with BPD need isn’t the greatest possible distance from themselves and from their disorder. What they need is security, healthy attachments, support, and genuine safety, so that they can become someone that they’re happy to be.

My borderline mind can be frightening and self-destructive. Ask anyone who was along for the ride this last year (when I was hospitalized not once but twice) and they’ll tell you as much.

But this mind also has a capacity for intense love, connection, and empathy — a potential that’s so often ignored or missed in people with BPD because of a stigma that leaves no room for us to grow.

For me personally, living with borderline has been retraining my brain to recognize when I am safe, after having lived for many years without protection in the face of complex trauma and PTSD. It’s been a process, too, to create the safety that I lacked for so long, and to trust in it when I have it.

It’s also been important to understand that safety doesn’t have to come in the form of support from others — it’s safety I can create for myself.

But that’s a realization I never would’ve come to if I’d listened to the stigma that told me that having BPD meant I was inherently bad, spiteful, or dangerous, teaching me to fear myself rather than be kind to myself.

Nothing about this process has been “flailing around,” as a clinician once said — it’s been a desperate search to regain the safety I’d been denied. And nothing about that process has been “manipulative,” either. Any misdirection to meet my needs, especially during a struggle I wasn’t prepared for and never asked for, was an act of survival, however flawed or unskillful.

My borderline mind has embedded in it a propensity for chaos that I won’t deny, but just the same, it gives me an incomparable ability to love and be loved. I have a sensitivity that keeps me deeply engaged with my world, a vulnerability that gives me immense integrity and strength, and an intensity that makes me creative and dynamic and alive.

And with the right support, I’ve been able to nurture that empathy and depth in incredible, unexpected ways.

I don’t believe that a diagnosis of borderline personality disorder is a statement of finality, of futility, of hopelessness, and I resent any suggestion that it is. I think for many, it can be an opportunity — a chance to grow, and to take everything we were taught to fear, and find the strengths hiding just underneath.

I wouldn’t be who I am without this atypical mind. And I’m tired of the world demanding that I be anybody else.

11 thoughts on “My Beautiful, Borderline Mind”