Why We Should Think Twice Before Idealizing Ruby Rose 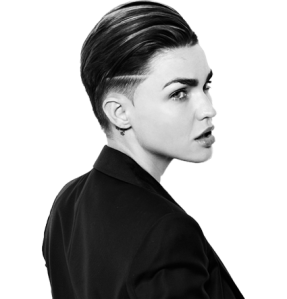 The internet is abuzz about Ruby Rose, a genderfluid actor, DJ, and model who appeared in Season 3 of Netflix Original Series Orange is the New Black.

While Rose is undoubtedly stunning and a perfectly lovely person, our idealization of Ruby Rose represents a larger problem in popular culture – the very limited portrayals of androgyny, and more specifically, who is allowed to be androgynous.

When the only celebrated expressions of androgyny are idolizing those who are conventionally attractive, thin, white, able-bodied, and assigned female at birth, many of us who fall outside of these expectations can begin to feel as though we are not enough as we are, and that we are not androgynous unless we can conform.

This is not just about Ruby Rose, either. This is a norm that has existed for a long time. Simply plug “Androgyny” into a Google image search, and you will see an overwhelming sea of white, hollow faces. Thin, curveless bodies will be hiding underneath suit jackets and pinstripe trousers.

The reality, though, is that there are many diverse expressions of androgyny – and they are seldom celebrated, let alone represented, in popular culture.

As an androgynous person myself, beauty norms around androgyny have left me struggling to feel valid. I have curves, I have fat – my body can’t disappear underneath a suit coat, and my cheekbones will never be sharp or defined. The pressure to contort my body into this ideal, though, definitely weighs on me each time a new Ruby Rose is glorified by the media.

It’s alarming that we have such wildly limited portrayals of androgynous and gender diverse people, and on my more pessimistic days I wonder if we ever will. We celebrate a very specific body ideal while leaving countless other folks on the androgynous spectrum to contemplate their validity and beauty.

Androgyny has long been defined by the mainstream on the basis of “passing” – that we be the chameleons of gender, able to be perceived as men OR women. But it is a problematic way to define androgyny because it limits it as an exclusive club, and validates our existence ONLY on the basis of others’ perceptions and cisnormative standards of beauty.

There are androgynous folks of every color and every type of body, but we rarely see them represented. Shockingly, claiming an androgynous identity does not require that you pose with a cigarette in your mouth and suspenders (seriously, why are there so many pictures like that?). It does not require that you be white, thin, able-bodied and conventionally attractive. The only requirement for androgyny is that you identify that way.

Holding Ruby Rose up as an androgynous ideal only reinforces the idea that the only valid androgynous people are those who can pass and conform. In other words, the fanfare around Ruby Rose is part of a harmful ideal that already exists in our society – the rules of who is allowed to be androgynous, and who is not.

By all means, we can appreciate Ruby Rose’s divine looks (and great performance in OITNB, no?), but we should be critical of why she is celebrated, while other androgynous and genderfluid people are seldom visible.

And if I haven’t made it clear by now, we should by no means place her on a pedestal for all androgynous people to aspire towards – because it is an unattainable ideal for the vast majority of gender diverse people.

We should push for more and better representation of genderfluid people – not just those who reach this ideal, but for folks of all sorts of diverse expressions of gender. That means moving away from these white, thin, AFAB, “passing” folks and featuring, instead, androgynous people of color, genderfluid fatties, gorgeous AMAB genderqueers, bigender cuties with disabilities, and every intersection in-between.

Holding up Ruby Rose as a sign of greater acceptance of gender fluidity is misleading, because Ruby Rose’s look has been celebrated in magazine spreads and movies long before she was born. This ideal precedes Rose’s fame, and is an ideal we need to break down in order to have true representations of androgyny, and other kinds of gender diversity.

So, by all means, swoon over Ruby Rose. I’ll be right there with you.

But while it’s exciting that mainstream media is having a conversation about gender fluidity, we shouldn’t call this progress. Glorifying a very limited, singular representation of androgyny and calling it gender “diversity” can do more harm to our community than good.