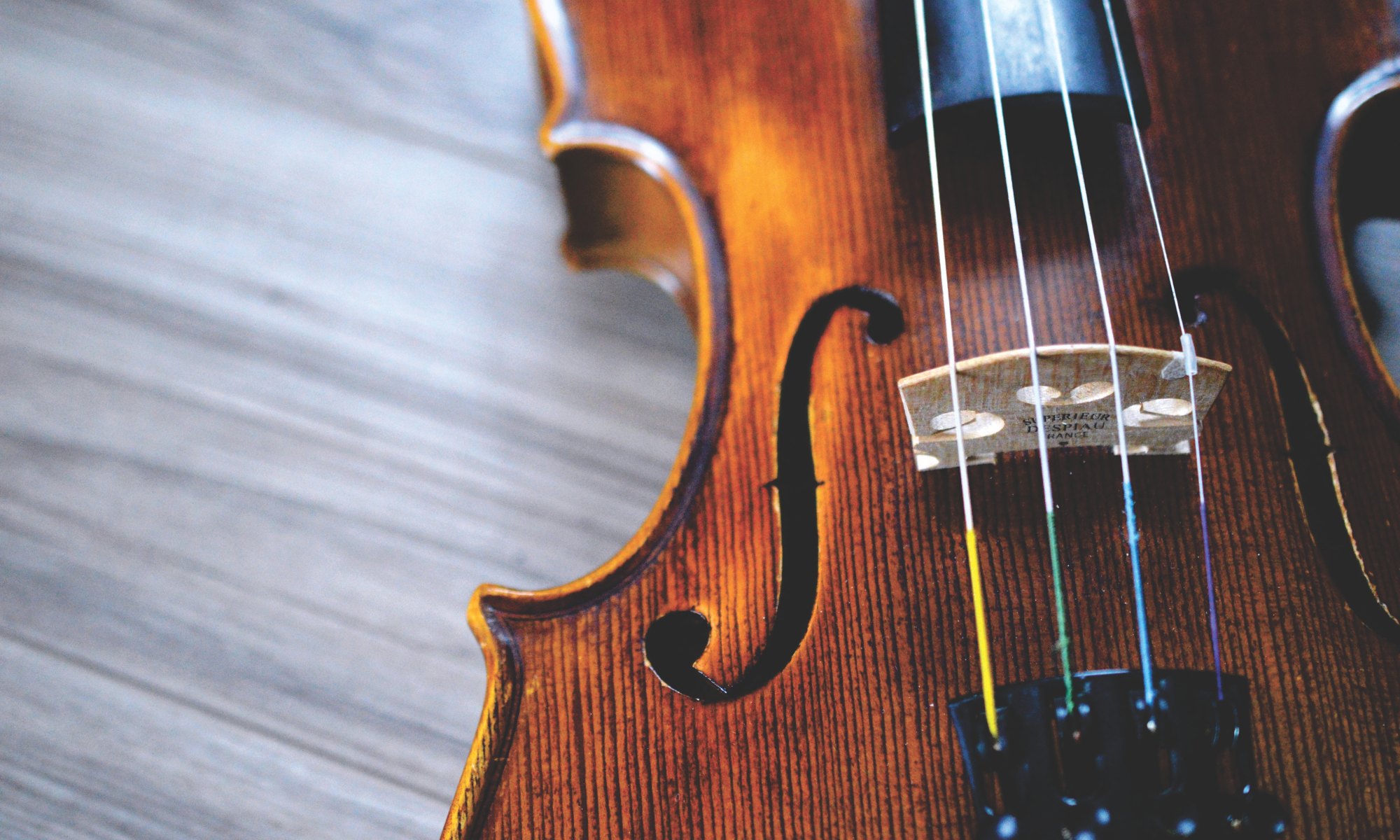 When your violin is supposed to be a cello.

When I was small and new to this world, my parents placed a radio beside my crib.

“We used to play classical music for you,” they told me. “You loved Bach.” For years, I fell asleep to the sounds of 12 different violin concertos, the music bouncing off the walls and into my tiny ears.

My mother swears that this is why I took up violin.

My parents eagerly exposed me to any and every song with a violin solo. I went from Bach to Riverdance to Dixie Chicks, the music captivating me. By the time I was 12, I told my parents that I wanted to make beautiful music like the people on the CDs.

They made me promise that I wouldn’t quit after just a few weeks. I would’ve promised them the moon in the sky or my allowance for every week of my life to have a violin of my own.

They conceded. We went to a store filled with violins from countries all over the world. I had my eye on one that came from Germany. I remember holding it, expecting to make a triumphant sound like all the musicians I’d listened to since infancy, and was shocked that I could hardly make it croak.

“You’ll get better after some lessons,” they told me.

“And after you get some rosin on the bow, of course,” the salesman added with a wink.

It was a little too big for me, but the music teacher at school promised that I would “grow into it.”

I’m not sure I ever did.

I believed that Lily Peters was the prettiest girl at Rhode Middle School.

And I was the luckiest kid at Rhode Middle School, I reasoned, because I was one of her closest friends. We were cast in the school play together and for those three months, we were inseparable.

I remember looking at Lily with so much envy.

Lily was idyllic in my mind. I grew out my hair and wore it just likes hers, with the messy bun perched right on top of my head. I got contact lenses and I carefully applied the same powdery shade of blue around my eyes. I begged my mother to let me wear high heels for the school dances, the slip-on sort that Lily would wear.

I tried doing all the same things — like it was an equation, and if I did the math just right the product would be the same — but was left with the lingering sense that it was some sort of farce.

When Lily became friends with Cameron from Speech class a month after the play was over, I could feel myself being pushed to the sidelines. I started to feel less and less important. Not even my pool party at the local recreation center — the one with the amazing water slide and the lazy river — was enough to regain her favor.

It all came crashing down one day in English class, when a giggling and mischievous Lily passed a note to Cameron. Cameron, delighted by what she saw, started to giggle uncontrollably behind me.

“I don’t think you want to,” Cameron said, smirking and shooting Lily a look.

Grabbing the note from Cameron’s desk, I opened it up expecting to laugh along with them. Instead, I saw the words, “Don’t you think Sam is really weird?” scribbled in Lily’s flawless cursive writing, a heart dotting each “i.”

My face began to burn, tears blurring my vision. Lily’s assessment was not unfamiliar. It was one that I’d pondered many times — why, no matter the equation or the formula or the number of pleated skirts I squeezed my body into, was girlhood so evasive?

Why didn’t I belong?

Lily never said. But the farce was confirmed, on perfect pink floral stationery, no less.

The teacher said that I was a gifted musician.

I was first chair in the Rhode Middle School Honors Orchestra, the best of the best. I was ecstatic to be the best at something. I was on my way to making beautiful music, like the violinists I now listened to on my CD player on the bus every morning.

I tried to move my wrists like they did, to make the vibrations hum and tremble, to make my violin weep the ways that theirs did.

We didn’t have anything but violinists in my old orchestra, but it was at Rhode that I heard a cello for the first time. While the violin made me excited, the cello had a stranger effect on me. The cello was deeper, more emotive, and twisted my heart until I thought it might burst.

Every day in orchestra practice I would stare at the cello players in awe. Their music made my high-pitched violin — something I once felt so accomplished in — seem so inadequate, so empty.

But it was too late, I reasoned. My parents had bought the violin and they would never stand to invest in another more expensive instrument, to pay for more lessons, to start over.

Besides, this is what I was destined to do. From the crib, remember? I recalled the stories my mother told me, when the Bach violin concertos lulled me to sleep. I remembered the Dixie Chicks concert when it was broadcast on the television, when they pointed at the violinist under the spotlight and said, “That’ll be you someday.”

But sometimes, when I was all alone, I’d stand the violin up on my lap and pretend, just for a moment, that it was a cello. I would close my eyes and imagine the deep bellowing of Bach’s Suite No. 1 rattling in my chest, the most dizzying and captivating melody I’d ever heard.

But the vibrations of my violin against my chest, too high a pitch, were a tragic reminder of what I lacked.

I grieved — and the grief, at the time, was so unexplainable to me — contemplating the mistake I could not utter aloud. The mistake, the very undeniable fact that my violin could never produce such rich and deep and lovely sounds.

My violin would never be a cello.

I wanted to be good at femininity, the kind of femininity that girls like Lily and Jessica and Courtney could wear so effortlessly but I never could.

I wore the homecoming dress with the high heels, my feet aching, my stubbornness forcing me to wear them until everyone, especially the boy I liked, had seen me.

It was a performance, I knew it, but I gave it my best — lusting after the affirmations, the encore, someone or anyone to tell me that I had done good.

I didn’t want to be myself, but that was OK. I just wanted to be beautiful, to be worthy.

So I practiced applying mascara the way I practiced my scales: repeatedly, persistently, and with great attention to every lash and every note.

My best friend in high school, Lucas, was a cellist. At our director’s urging, Lucas decided that we should enter the state competition as a duet. He chose a concerto by Mozart and invited me over to his house after school one day to give it a whirl.

He brought me down to his basement and into a makeshift practice room, with sheet music strewn about and his cello leaned precariously on its side. He carefully tipped it upright again and, sitting down, drew it close to him.

As I removed my violin from its case, he began to warm up with a G major scale. I paused, letting the notes wrap around me and echo in my ears.

I wondered what it must feel like, to keep your instrument so close to your heart.

He looked up at me and smiled, setting down his bow.

“Hey,” he said with a laugh. “Do you want to switch instruments? For fun?”

“Yes!” I exclaimed, with a little too much excitement in my voice.

Handing over the violin to Lucas, I made my way to the cello, hands trembling.

What if I was terrible at it and all my dreams dissolved in a single moment? Or what if, miraculously, I was so proficient that I could convince my parents to let me switch instruments? The moment was ripe with possibility and heavy all at once.

Bringing the cello near — tilting my head and bringing my ear as close to the strings as I could — I took a deep breath. I pulled the bow across the strings in a hesitant, slow glide, and felt the weight of each note in my chest.

Something about the richness and depth of the sound, reverberating in every bone in my body, felt so tremendously right.

Playing each note so carefully, I looked at Lucas and confessed, “I should’ve played the cello.” The confession was drowned beneath the vibrations that filled the room.

In a single scale, I broke my own heart.

I can tell you the exact moment I realized, without a doubt, that I was not a woman.

Shocked by my own silhouette, I could feel everything shifting. I ran my fingers across my chest, studying myself intensely in the mirror, trying to resist the joy that was coming over me. I did not want to love what I saw, but I could not take it back.

“What do you think?” my partner asked me from the other side of the room.

What would the future be now? Now that I knew the truth?

“I think it’s…” I was holding back tears. “I’m trans. I really am transgender.”

I recalled the moment that I held Lucas’ cello near me, and all the years after, when, no matter how beautifully I played my violin, I never felt whole or satisfied. The way my scales withered on the vine, how every pass across the strings was empty, and how the notes were always too shrill.

And the regret that washed over me — intense, relentless — when I watched Lucas every afternoon, swaying side to side as his cello beckoned so sweetly from across the room.

“Because nothing will ever be the same,” I whispered.

It was in that moment — imagining who I might be, and the terrifying and glorious possibilities that it held — that I realized that the instrument we’re given is not always the one we’re meant to play.

Become a Patron to donate as little as $1 per month, and unlock some pretty cool exclusive content when you do!

Photo by Providence Doucet on Unsplash.

30. 🥳🎂🎈✨
It’s #TransAwarenessWeek, which has always left me with complicated feelings. Awareness is far from enough when trans people are dying, both at the hands of others and by their own. Awareness isn’t enough when legislation is constantly being weaponized to strip us of the most basic dignities and rights. Awareness feels cheap in a world where transgender people are struggling just to survive.
Hi, friends. 💕
My 30th birthday is coming up and I’ll be starting a new job soon, too. So grateful for the support that’s allowed me to get to this point in my life. 🪴 I feel stronger every single day.