I will say this upfront: As someone who will never know the heavy weight of institutionalized racism, the fear and terror of simply existing in a black or brown body, and the trauma endured day after day, watching again and again as members of the community are murdered and never see justice, this is not my moment.

The most important voices right now are the powerful, passionate, and formidable voices found within communities of color, around the country and around the world.

Women and men (both cis and trans*), and of course, queer folks of color, who all have something at stake here, should always be brought to the center of these conversations. Adding my voice here is in no way intended to shift the focus away from these folks.

But I believe that silence is a dangerous choice in light of what is happening in Ferguson. To say nothing and blog per usual is to ignore the gravity of this injustice.

Tonight, a grand jury made the decision not to take Darren Wilson to trial. Despite taking twenty minutes on air just to defend this choice, and warranting a speech from the President of the United States, it is apparently not nuanced or serious enough to warrant a trial.

I want to take a moment to offer solidarity to those around the country who fight, tirelessly, for what is right, in spite of the salt thrown on their wounds, and in spite of the real danger they face by standing up and demanding justice.

I’m here, on this platform, to offer love, support, respect, and solidarity to the activists of color who have taken on these immense systems of oppression, and had the courage to share their stories despite how much it hurts, despite how difficult it is, despite how high the stakes are.

When police officers like Wilson supposedly risk their lives in the line of duty, they are hailed as heroes by many, even after they’ve killed a teenager. But when Ferguson residents risk their lives to fight for a more socially just world, they are considered a “riot” and a threat to public safety.

If you are more upset about the reaction of justified anger instead of the slain teenager whose body was left in the street for all to gawk at, you are part of the problem.

We should be asking police officers not to shoot unarmed teenagers; we should be demanding that they not abuse their power and be held accountable for their actions.

We should not be asking grieving communities to stop grieving, or policing the behavior of people of color during a tragedy. This kind of visible protest and action would not even be necessary if being black in this country weren’t a death sentence.

When the trauma of racism seeps into your very being, seeking to dehumanize and erase you, being quiet can cost you your life. Being “polite,” being “respectable,” being “calm” — these responses are ridiculous when you consider the outlandish abuse and racism perpetrated on the part of law enforcement, and it is victim-blaming.

To ask for peace when there has been no justice is an outrageous request.

To the folks out there in Ferguson, as well as those participating in the actions happening around the country, who are fighting, quite literally, for your lives, I want you to know that LQTU! stands by you. We see you, and we are listening.

To our readers who have the lived experience of racist oppression, a burden you must carry each and every day, we hope that this platform is always a place where you feel safe to share your voice, and feel validated, recognized, and heard.

To our readers who are not people of color, we remind you that ally is a verb, not a noun. Solidarity requires ongoing action — not empty words and promises.

To every reader, I am here to proclaim without a doubt that black lives matter.

Both myself and the staff would like to take a moment to refer our readers to various bloggers, advocates, and resources, with content written by people of color.

It is meant to be a place to start, and in no way is complete or perfect (and we welcome more relevant links in the comments, as always, and we’ll add them to the article).

Owning My Truth (owning-my-truth.com): Owning my truth while finding my way.

Protesters in Ferguson penned an open letter that you should read.

Additionally, folks in Ferguson have asked for donations to the Ferguson Public Library, which has been an invaluable resource for residents and their children.

Lastly, and perhaps most importantly, please donate to the Ferguson Defense Fund.

BEFORE COMMENTING: Please do not debate the particulars of this tragedy in the comments. This is not the time nor place. White folks, I’m especially asking you not to make this about yourselves and instead, tune in.

The comments section will only display comments of respect and solidarity, links to relevant resources by people of color, and otherwise healthy dialogue that is POC-centric. All comments that fail to abide by these guidelines will be deleted by moderators.

Folks who may be triggered by racist garbage should take caution when reading the comments, as moderators may not immediately spot the problematic ones. Please take care of yourself and put your safety and health first. If you’d like to offer feedback but are not comfortable engaging in the comments section, you can always tweet me directly at @samdylanfinch.

6 thoughts on “LQTU! Stands in Solidarity With the Brave Protesters in Ferguson and Beyond” 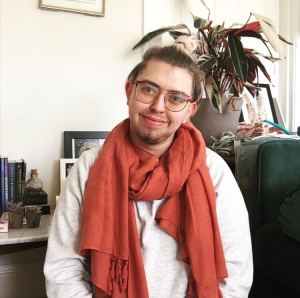 Sam Dylan Finch. I’m a writer and wellness coach that’s passionate about queer joy — with none of the self-helpy bullsh*t. I wrote that thing about people-pleasing that you showed your therapist. I’m much weirder in real life.  ✨ He/they. More?